Life Saving Israeli Self Defence Techniques for Any One & Every One

Always Be Prepared Don’t Be a Victim

Invest in Self Defence

Don’t depend on someone for help

New Delhi, unfortunately is known for it's on road violence. This workshop will focus on situations that one may encounter on the roads of this city.

"It's better to have the tools and not need them, than to need them and not have them"

Notes:
1. Car would be provided by us.
2. Knowledge of driving not required. 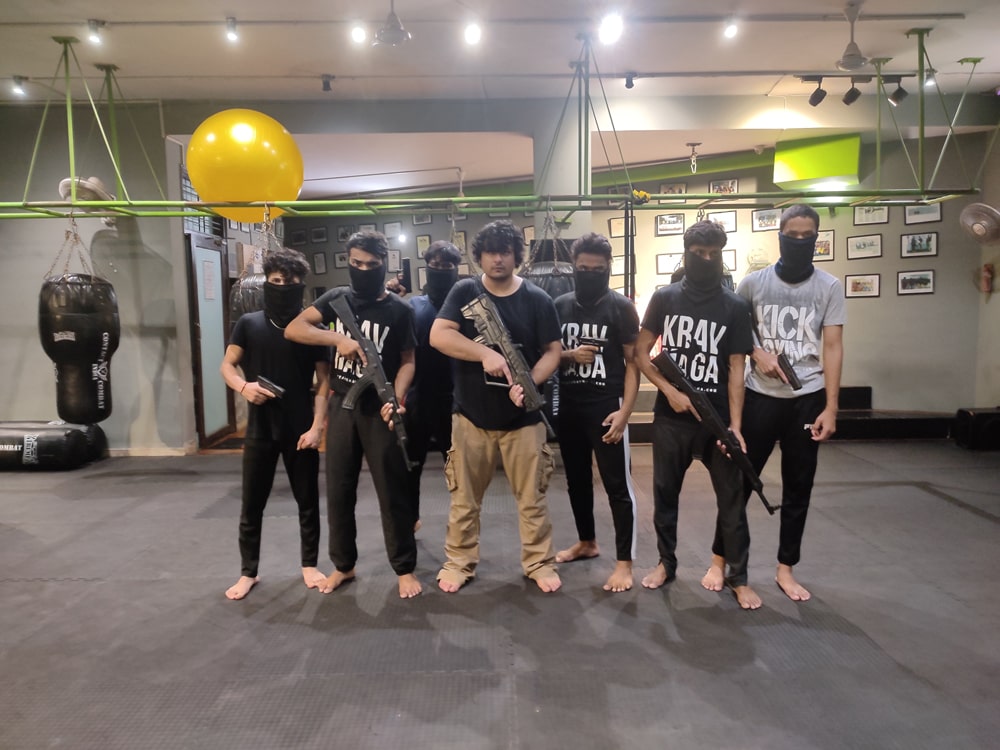 The Military Course taps into the true origins of Krav Maga. It provides participants with a straight forward easy-to-learn, effective and aggressive set of techniques, tactics, mental capabilities, teaching and training skills most suited for the missions and needs of military units.

The graduates of KMG’s Military Course can rapidly bring members of any military unit to the highest skill level possible in the military techniques and tactics of Krav Maga, CQB and combat. This includes a focus on using an assault rifle as an impact weapon while facing a single enemy or multiple aggressors when shooting is impossible, illegal, undesirable,

or unwarranted. The KMG training also includes systematic thinking and efficiency appropriate to different environments within the modern military milieu, all in accordance with each unit’s tasks and “job description.”

Who is this course for?
The curriculum of the Military Course is tailor-made for different groups or individual units. The optimal recommended duration of an in-house MIC, for a characteristic military unit, is about five to six weeks.

We also offer an option suitable for certified KMG Instructors with the appropriate background. In this case, the course length is ten days and is geared toward improving their overall skills and teaching arsenal by qualifying them to instruct their regular students who are also serving in governmental units.

Where to get more info?
Please have a look at our calendar to find out when and where the next course will take place

As crime and criminals get more and more sophisticated, they more often than ever, go after business-men, political figures, movie stars, executives and other very important people. The criminals' objective can be to get ransom, change political balance, rob, pride, take revenge or other reasons that can result in the injury or death of the VIP. Today, more than ever before, the professional VIP Protector is needed to ensure the safety of those under threat across the globe.

Advance Training in General and with Firearms will include:

A modern Law-Enforcement agency needs the tools to educate its officers and members of regular and special units in the topics of defense tactics, self-defense, hand-to-hand combat and fighting at close quarters when the firearm cannot or must not be used. Building and educating a fighter as a whole and not just as a technician of weapons (firearm, baton etc.) is essential to achieve a well-rounded officer. Such an officer is capable of being a determined and aggressive fighter to fulfil the demanding and dangerous tasks on-hand. One that can respond correctly, without using excessive force, but with excellent ability to solve any problem and including protecting his fellow officers or civilians when needed.

The Krav Maga law enforcement-training curriculum will include:

With the increased threat to airlines from criminal / terrorist attacks in the not so distant past , their training to include self - defense . Basic elements of the same are :

The Krav Maga law enforcement-training curriculum will include:

Krav Maga training will include drills in which students apply as much contact , power and resistance against each other as they can without undue risk of injury . Takedowns , joint locks , chokes and other grappling techniques can only be validated when the student's sparring partner is determined to defend himself against those techniques , just as an actual adversary would be . A padded mat area and clear rules of engagement are necessary for effective grappling training . Heavy bags , pads and protective gear allow students to safely practice full power strikes . Other than these Krav Maga training will also include :