Life Saving Israeli Self Defence Techniques for Any One & Every One

Always Be Prepared Don’t Be a Victim

Invest in Self Defence

Don’t depend on someone for help

Contact Combat India was founded in 2014 by Kriti Rawal & Kaustav Sehgal with the objective of introducing these battle proven combat systems for civilians to protect themselves in situations such as street attacks, rape, molestation, kidnapping and armed assault. Since then, Contact Combat India has trained over 5,00,000 students in Krav Maga through over 500 courses and workshops in reputed Corporates, Governmental organizations and NGOs.

We have been associated with the prestigious ‘Delhi Police‟ in providing Krav Maga training to over 5,000 young girls of Kendriya Vidyalaya School, National Thermal Power Corporation (NTPC) Ltd. as part of ‘Sashakti’, an initiative where girls would be trained in easy-to-learn self defence techniques.

We also had the privilege of training 8,000 girls in 40 Schools as part of BJPs initiative under guidance of Delhi BJP Chief Shri Manoj Tiwari and Greater Kailash RWA Head Mr Pankaj Wadhawan.

We also organized a Self Defense Course in association with Teach For India for underprivileged South Delhi Municipal Corporation (SDMC) School children.

Our main motto is to make people better fighters so that they can protect themselves and their families and simultaneously have a functionally fit body having a low body fat %.

We make our Krav Maga class fun, challenging and available to everyone! Our students range from ages 4 to 65, and we tailor the class to each individual, whether their goal is for fitness, self defense, or addition to a healthy lifestyle!

We at Contact Combat India are driven by the vision to make a significant difference in the way the world lives. We specialize in helping people to enhance the quality of their life through self protection techniques and services through these core principles :

Contact Combat India has been associated with many MNCs, schools, government organizations, NGOs of which a few include :

Kaustav Sehgal has taught self defense and unarmed combat to military, security professionals, law enforcement and civilians across India.

Kaustav’s tryst with martial arts began at an early age with a black belt in Taekwondo. However, neither his belt nor his subsequent training in competitive MMA (Mixed Martial Arts) would help him during a street fight where he was stabbed and severely wounded by a completely untrained attacker. Humiliated and angry, he realized true self defense has nothing to do with “martial arts".

This realization fueled his search for realistic self defense techniques that culminated with his discovery of Krav Maga, - the Contact Combat system of the Israeli Defense Forces(IDF).

Since then, Kaustav has trained under some of the world‟s leading Krav Maga experts including Amnon Darsa, VikramKapoor, Avi Moyal, Avshalom Dahan and Eyal Yanilov.

He is one of few instructors who can trace the lineage of his training directly back to Imi Lichtenfeld, the founder of Krav Maga.

In addition to being a senior civilian instructor, Kaustav holds numerous certifications in:

Kaustav’s varied clientele include well known names in the field of industry and entertainment such as:

Kriti Rawal is a Food Technologist with passion in martial arts and self defence. She is a recipient of a Gold Medal from the honourable Vice President of India - Shri Venkaiah Naidu . Being an MTech graduate in Food Technology, she has a rich knowledge in Nutrition & Dietetics.

She has been involved in martial art training since the age of 8, securing a Black Belt in Karate. Being a woman, she was deeply horrified by the sad state of safety in our country hence she decided to change her career path to pursue self defence training to overcome such situations. She strongly believes that self defence is a basic right to life and is hardly taught in schools or educational institutes in India.

While also being an engineer, she was fascinated by tangible, logical techniques in Krav Maga that actually work on the street. Since then, there was no turning back and she has trained under some of the world’s leading Combat experts including Vikram Kapoor, Eyal Yanilov, Paresh Kumar Joshi etc.

IN ADDITION TO BEING A CIVILIAN INSTRUCTOR, KRITI HOLDS NUMEROUS CERTIFICATIONS IN:

Kriti Rawal has been associated in teaching Self Defense to over 4,000 young girls of SDMC Schools, Kendriya Vidyalaya, NTPC ,Badarpur, Teach for India etc.

She has single handedly trained over 10,000 working women in Self Defense in top Corporations like :

Her proficiency in effective Krav Maga skills has been recognized and covered by Media houses such as Times Group, NDTV, Dainik Jagran, WhatsHot, News24 etc.

Prem has been an avid martial artist since the mere age of 5 years wherein he has secured a black belt in Taekwondo. He has been training with CCI and directly under the guidance of Founder & Head Instructor Kaustav Sehgal since 5 years. He is also a certified Self Defense Instructor from Delhi police.

Vimal is the Assistant Krav Maga Instructor with teaching experience over 6 years. He is a National level footballer and has been part of training ONGC officials in self defense and combat during the Security Awareness Week.

Sunil is a specialist in strength and conditioning. He has knowledge with weights as well as body weight training. He also a certified yoga instructor. He has 4 years of teaching experience. 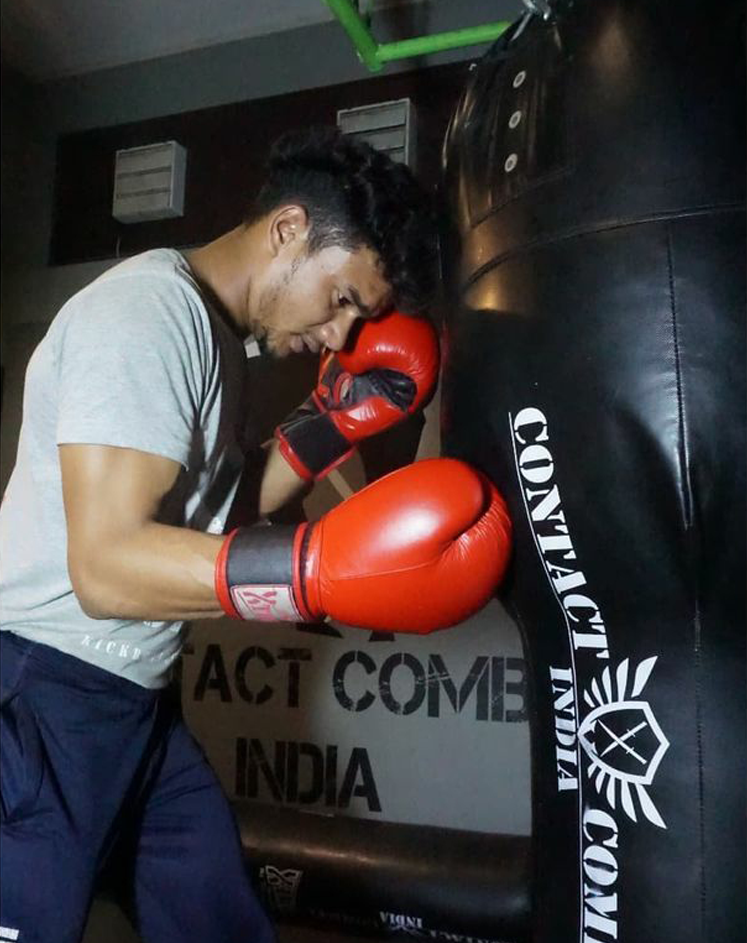 Tahir is the Head of the Kickboxing Division at Contact Combat India. He is the recepient of several Gold medals in MMA, Boxing, Kickboxing competitions across India. Being supremely athletic, he has received top positions in Cross Country races, Wrestling matches etc. Gear up for his fat burning, body blasting workout sessions.